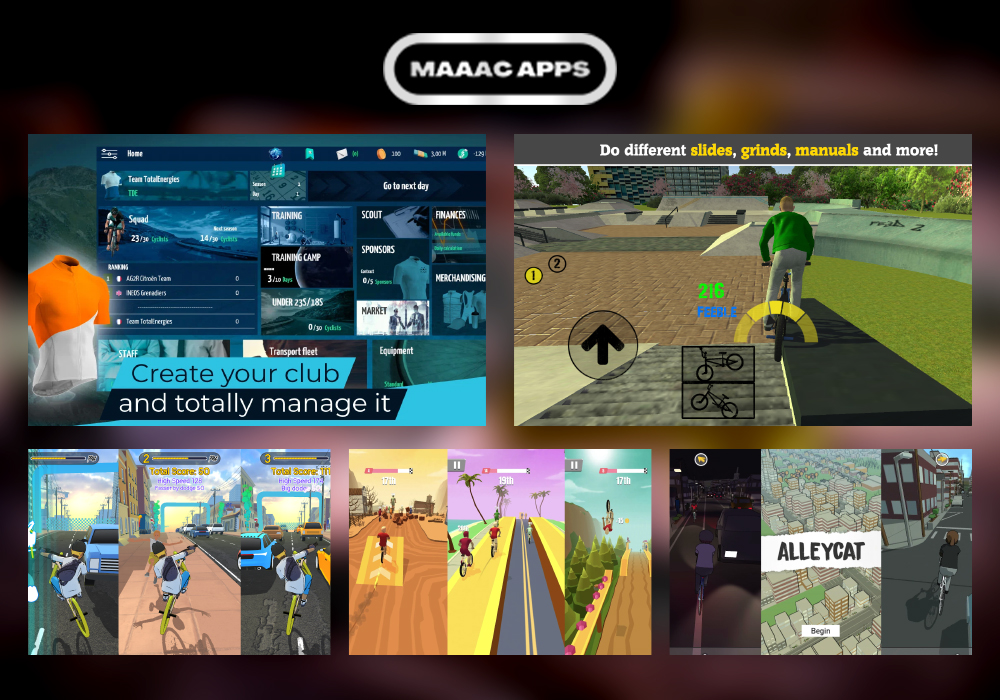 It would be a beautiful day to ride a bicycle. No matter where you are, it’s always a beautiful day in our online bicycle games, regardless of the weather outside. The finest cycling games come in a variety of locales, including urban streets and rocky mountain peaks, as well as racing and stunt categories. But there is one feature that practically all cycling games share.

Cycling is a fun sport that surprisingly converts well into the gaming business. While some racing sports games focus on racing, like Nascar and Motocross, others give topographical problems, like snowboarding games and skating games. The top 10 cycling games for Android and iOS are listed below (iPhone, iPad, iPod touch).

The games you’ll see next will let you explore both real-world situations and previously undiscovered realms while riding a bike.

Are you looking for some of the most played cycling games that are available for free download for Android, iPhone, and iPad? Here is our comprehensive list of the top 10 cycling games for Android tablets and smartphones as well as the iPhone, iPad, and iPod touch.

You will enjoy this selection of cycling games from the Apple Store and Google Play Store if you are passionate about the world of extreme cycling. Enter today!

The ultimate cycling manager game Live Cycling Manager 2022 may be downloaded on both iOS and Android devices (iPhone, iPad, and iPod touch). You can choose and establish the cycling club of your dreams in the game and control every aspect. Also. you can play the game and take on the role of Sports Manager for a professional cycling team, competing against the other 40 teams till you win.

You may manage all parts of your club in the Live Cycling Manager 2022 game, including training sessions, staff, transfers, registration in races, racer selection, and race plans, as well as finances and kit design. Additionally, you can hire top mechanics, trainers, and cyclists.

This game is for you if you like cycling and managing games. Give directions to your cyclists, engage in races in a 3D environment, and become completely immersed in the experience of racing in real-time.

Discover the excitement of a bike race and sports administration. Bring your club to the top of the global rankings.

A fascinating cycling game called BMX Freestyle Extreme 3D 2, sometimes referred to as BMX FE 3D 2, is accessible for free download on both the Google Play Store and the App Store. It is an accurate 3D simulation of freestyle BMX riding where you may execute a variety of tricks on several stunt sites, including ramps, bowls, and other obstacles. The game also features a tonne of dedicated stunt riding parks.

There are eight different skate parks in BMX Freestyle Extreme 3D 2 that were created with inspiration from all across the world. Even better, you may design your very own unique skate parks for riding.

You have a tonne of customization choices for both your BMX rider and your BMX bike, so you can make them both uniquely yours. Try it out right away to find out why more than 10 million people have downloaded the games in the Freestyle Extreme 3D series.

A simulation of urban cycling is included in Bike Life. It involves not just a measured or calm ride but also pulling off a number of stunts and dodging moving cars. You can navigate traffic and pedestrians on your bike in a variety of ways.

Bike Life is a thorough dive into the riding world and all of its facets. You must score the most points possible, which is indicated on the screen, and get to the finish line without colliding with any vehicles or oncoming traffic.

You must race other players in a high-speed bicycle race on the streets of several cities and towns in the free mobile game Bike Rush for Android, iPhone, and iPad. Here, you must simulate a professional cyclist that is competing to cross the finish line first while dodging several opponents and obstacles.

The high-speed bike race game’s city streets are excellently created, giving you the impression that everything taking place is actually taking place. Keep in mind that as you acquire speed, there will be a number of challenges that could prevent you from succeeding.

Additionally, you must be vigilant and quick to respond to changes in the racetrack environment. In addition, you can use several cheats in this game to get around restrictions and gather crystals, which can then be exchanged for a variety of game-improving items. Multiple gaming locations with unique atmospheres, landscapes, and topography have been offered by the developers.

Alleycat is a randomly generated open-world bicycle racing mobile game that takes place in the busy city streets of a cycle racing simulator. You must be faster and more aware than your opponents in the game since the path is littered with dangers and obstructions.

You will encounter a variety of challenges on the road to the finish line that you must overcome in order to reach there. In an effort to finish the race as quickly as possible, competitors move from checkpoint to checkpoint.

Amazing graphics, city streets used as racetracks and numerous barriers can all be found in this game. In addition, Alleycat features the most straightforward control scheme.

Aim to cross the finish line first and avoid the waiting challenges. Choose your own route across the city, but if you want to finish the race unharmed, keep an eye out for other traffic on the road. Be cautious in confined spaces since parked cars might open their doors.