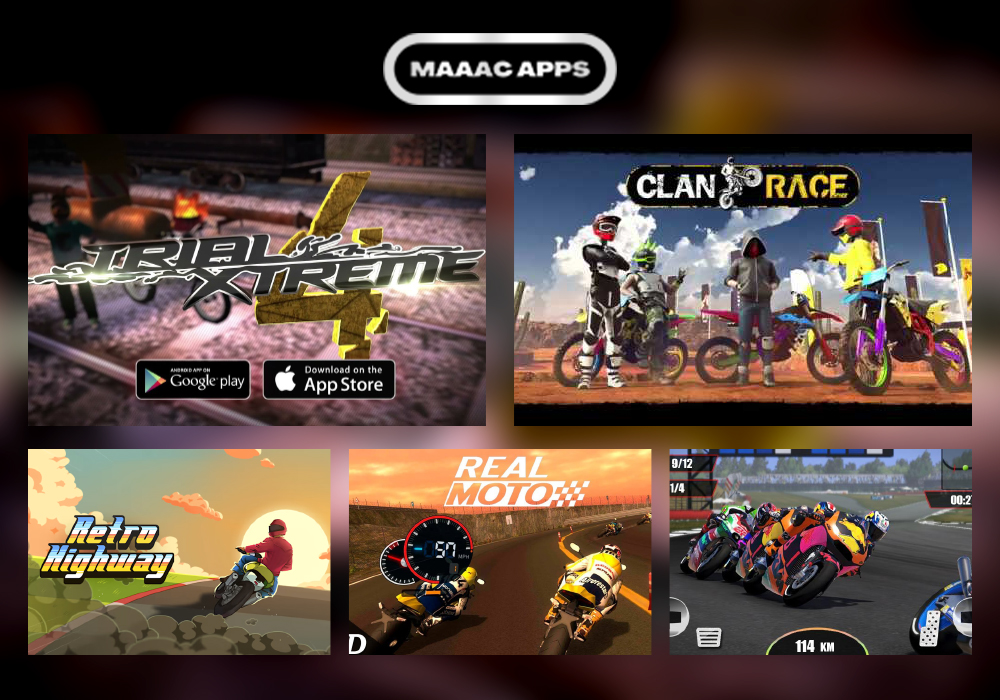 In the modern era, anyone can play games on their mobile devices such as bike games, and car games. As gaming became more and more popular, new and intriguing genres emerged. Check out the current top 10 bike games worldwide. Everyone can find something they like. We’ll talk about Android motorbike games today.

Trial Xtreme 4, which is a part of the Deemedya INC organization, is the follow-up to a very successful Android game. Your balance and other skills are put to the test by that task.
You must maintain your balance while navigating the challenging virtual obstacles with the buttons on the screen. Each stage becomes harder than the one before, which tests your skill.

The most recent version of Trial Xtreme, the “greatest trial bike riding game ever,” requires you to gain fresh motorcycle-riding experience. Ride a bike or stroll through more than 70 levels of dizzying challenges to experience the sea of excitement. Participate in thrilling racing with other players at the moment and dominate them.

The game’s progression is intriguing because it adds new slopes and levels in addition to having a completely redesigned and better physics engine and controls that are incredibly responsive. Gain money and upgrade your bike, making it more durable, for each victory in this game.

Four motocross-styled bikes are available, each with the option to alter its engine, wheels, front or rear forks, and body. The racer has the opportunity to customize their prestige, which looks to be their facial styles, as well as their helmets, shirts, pants, and boots. You will need gaming money, which you can get through in-app purchases or by winning races, to upgrade the bikes and customize the rider.

The race courses take place in a variety of settings, such as harbor piers, gorges, and construction zones. As you race to the finish line, you will encounter a variety of jumps, ramps, tunnels, and other obstacles.

You can compete against the top players in the world in PVP mode, and you can play against or alongside other members of your clan in Clan mode.

The last option is Season mode, in which you compete in many races to prove that you are the finest racer in your clan.

The most sociable and Xtreme real-time PVP motocross game yet is being released by the makers of the popular racing series game Trial Xtreme. Join a clan or start your own to compete against millions of gamers and prove to others that a clan is for more than just fighting—it’s racing!

Real-time competition amongst players from across the world to earn incredible rewards! Together, build your own clan and prove to the other clans that yours is the best one in the game. To be crowned the best Clan Race rider in the world, finish the season in the top division. Taunt your competitors while racing with a variety of unique emojis. The most insane 3D graphics you’ve ever seen combined with meticulously planned levels to create.

Due to its retro charm, which includes simplistic controls and pixelated graphics, this game’s design has an antiquated appearance.

It’s a retro game that allows you to travel back in time to the heyday of the Sega Genesis on your smartphone. Take the Retro Highway back to the days of pure arcade excitement and 16-bit blast processing! Retro Highway is a retro game that aims to mix the usability of contemporary games with difficult high-skill gameplay and endearing old-fashioned graphics. Play 60 fps of high-octane retro action on your console.

Complete challenging tasks, then compete for the highest scores with your friends or the entire world. Discover six distinct settings, from a scorching desert road to a futuristic moon colony.

Choose from a variety of ten or more motorcycles in your garage to suit your playstyle, and upgrade numerous powerups. Enjoy the nostalgic high brought on by the chic pixel art graphics and a chiptune soundtrack.

Real Moto is a tiresome motorbike game that offers players more than 150 challenges to put their talents to the test. You can accomplish this by playing around with 11 motorcycles that you can customize at your convenience and choose the style that best suits you.

In the motorcycle game Real Moto, users compete against other gamers from across the world while riding more than a dozen different bikes on reputable circuits.

Real Moto has relatively straightforward controls that are perfectly suited to touchscreen devices. By default, your bike accelerates, but you may brake by softly touching the brakes with your right finger and turn by lightly swiping your left thumb across the bottom of the screen.

You start out with just one bike in your garage, but as you go through the game and earn money and points, you can unlock a lot more. Additionally, each bike can be individually colored, albeit doing so will cost you money. Of course, you can also alter the appearance of your driver.

Real Moto is a 3D motorcycle racing game with a fantastic campaign mode that lets you race against a variety of opponents on a variety of courses.

Fans of speed and motorcyclists will like the adrenaline-filled experience provided by the game, which is a part of The Shoot down Games. It’s an exciting game that puts a true biking experience right at your fingertips.

The MotoGP game is mainly about controlling the bends and moving forward quickly. You must attempt to obtain these very simple to use and enjoyable racing games. Now, you aspire to compete in authentic bike races!
Speed and skill are necessary for this fantastic moto GP. Are you a skilled enough driver to race your motorcycle across a dirt track at top speed or balance it on a stack of wood? Start your vehicles and enjoy this no-cost motorcycle game now! Enter the competition to prove you are the fastest auto racer.